The area around old kharera village (now Hauz Khas) is dotted with many big and small monuments. Camouflaged by large trees and posh houses these structures stand as a silent testimonial to time gone by. Usually set in a small garden plot they offer a place to to the locals to step out of their hurried routines and pause a little.

It is interesting that during the 14th-15th century reign of Sayyid and Lodi’s the city construction was limited to tombs and mosques. They lacked resources and Sikander Lodi shifted his capital to Agra thus further restricting the building of new structures in Delhi. So, the construction of grand forts, palaces, cities that the early Sultanate rulers did practically came to a halt during early-14th to mid-17th centuries except a few exceptions and there. Interestingly the Sayyid, Lodhi and Mughal rulers and nobles chose Delhi as a resting place for their loved ones so slowly in that period Delhi turned into a sort of necropolis.

It is strange that most of these mosques and tombs, except a few large ones, remain unsung even after their recent beautification. The illumination of these structures by ASI hasn’t helped much in promotion as people barely pause to look at them.

Apart from the tombs and mosques there are a few other small structures like Sakri Gumti that could have been part of a larger complex of buildings or perhaps a gateway albeit a strange one.

All these structures lie in close proximity of each other and to the Hauz Khas group of monuments. The two Gumtis are separated from each other by a road that ambles into the posh Hauz Khas Enclave, Green Park and leads to HKV. 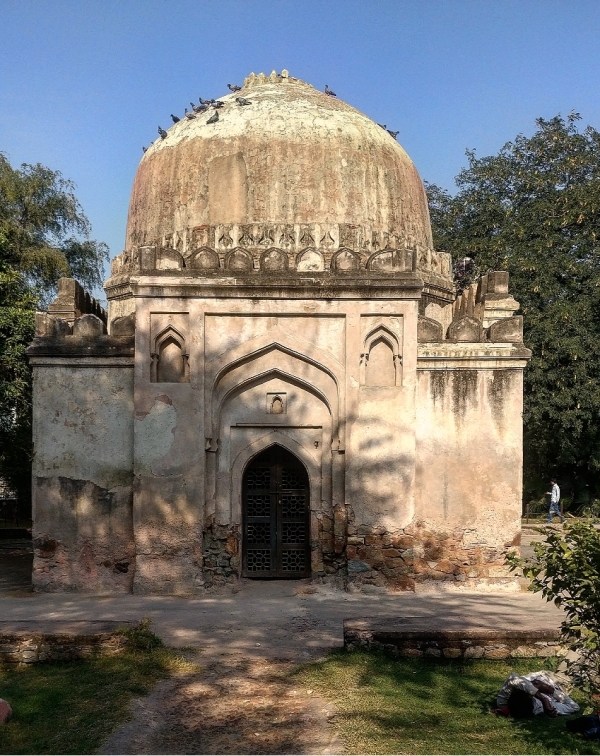 This petite Lodi period (AD 1451-1526) structure stands gracefully in a small garden patch.  The cubical little mausoleum is perfectly proportioned and has small decorative alcoves.  It measures 15 square inches and is built with rubble masonry and then plastered like all the other structures of this period. There are numerous pointed arches of the embossed rectangular facades on all the sides.  A semicircular dome crowned with a blooming lotus finial adorns the structure.

The kanguras (battlement-like ornamentation) and the hints of tiny minarets emerging from the corners of the octagonal drum (base) of the dome make it a pretty little building.

The Choti Gumti is a tomb and a single grave of an unknown person lies in its forgotten dark interiors that are closed to the public eyes. There is a narrow entrance with steps leading to the upper level where one can go around the dome and get a bird’s eye view of the area but that too was inaccessible. I came to know that there is a painted medallion on the ceiling. I will try and get access in a few days. 🙂 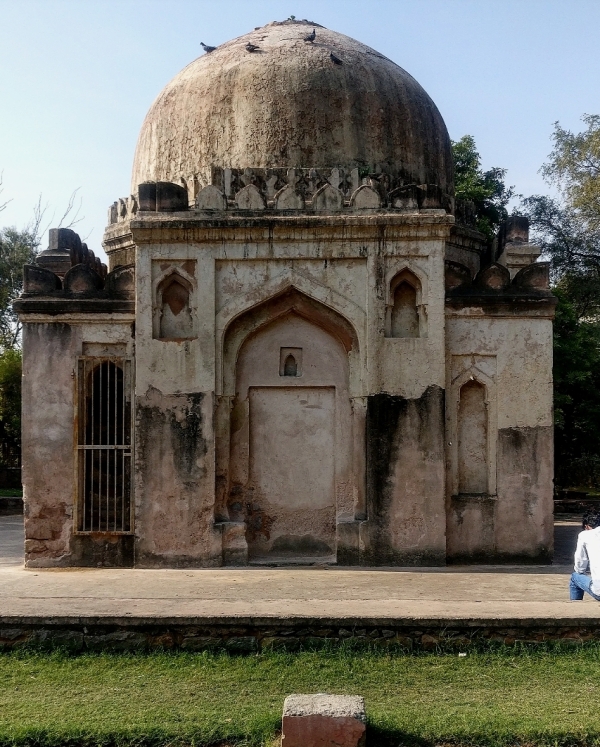 I sat to rest on an empty bench watching the men enjoying their siesta and soaking the early winter sun. A group of young girls chatted animatedly as the walked around inspecting the structure. The pigeons sat on the dome obliviously to life around them.  A young lad served tea to two workers eating their lunch on the grassy patch. I had to cover a few more places and the sight of food was making me hungry so I decided to leave. The barricaded garden has a shop on a far side corner and a makeshift entrance made for the convenience of the shopkeeper I guess. I took that exit and crossed the road to Sakri Gumti and Barah Khamba opposite its gate.

As there is no grave inside we know it is not a tomb. In fact there are entrance arches on all its four faces making it look more like a gateway but a gateway to what we don’t know. Also, there is a half broken rubble wall running along its eastern side, originally it would have perhaps blocked one of its entrances but as I looked closely there seemed one side of a smaller arch entrance in that too right in front of the entrance of the main structure. The wall is broken from that point. One can see a small window too.  Who built the wall and why we do not know. The ornamented arches and windows on the exterior wall give it a semblance of two-storyed building.  The short dome rests on a relatively high drum. A row of kanguras similar to ones around the roof’s vertical expanse surround the dome. I didn’t step inside but will go another time and update on how it looks. On the exterior wall there are some roughly carved patterns embossed here and there.  Otherwise there is no other ornamentation. 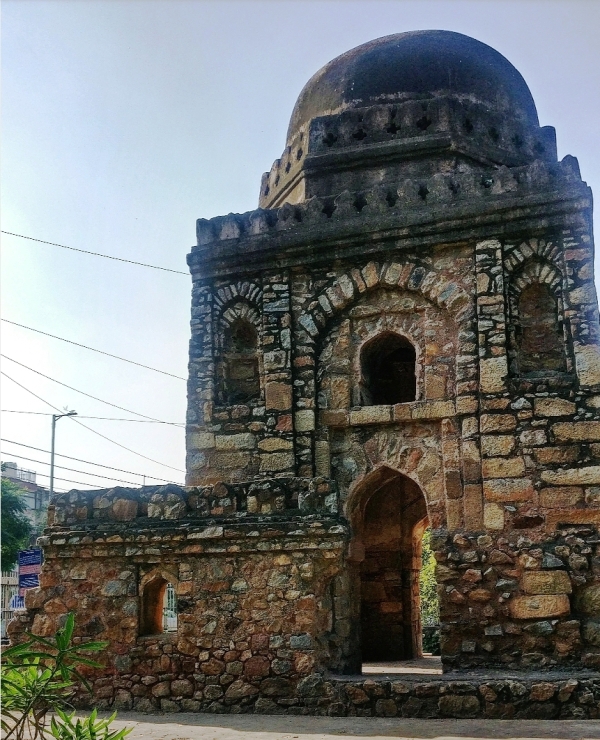 Even though the structure is very intriguing not many people visit it. I just saw one gentleman lunching quietly on a nearby bench under a tree shade. There was no guard or caretaker in sight. 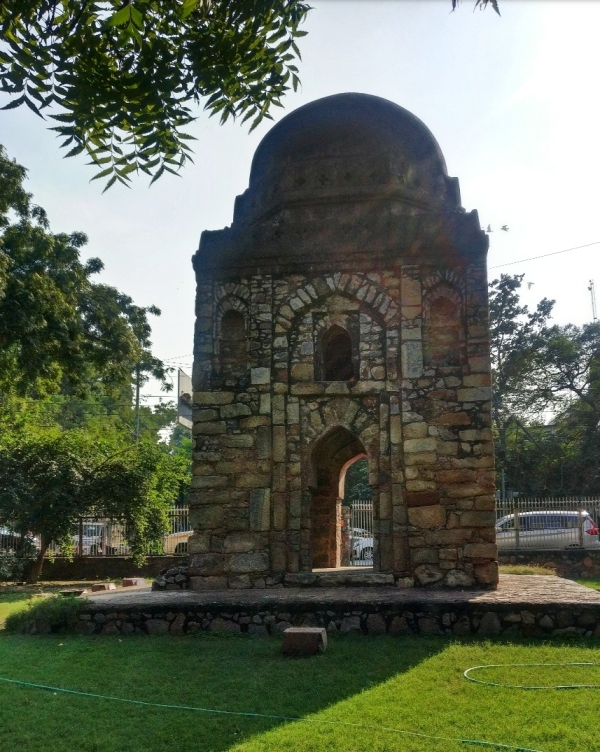 These little gems are an integral part of the urban layout of Delhi. They stand there tenaciously holding on to life as the city around them evolves at maddening speed.

Stop by sometime to pause and reflect on this heritage of Delhi that mostly doesn’t get its due.