A warmly spiced, dense bread pudding in a mug is all you need to satisfy winter afternoon sweet cravings. I love the classic bread pudding though these days I make various versions of it with different flavours. A ninety minutes oven baked recipe that was part of my growing up has become a two minute wonder since the microwave came into our lives. Although the  pudding tastes exactly like the baked one somewhere my old-fashioned self still prefers the slow release of fragrances drifting from the kitchen.

I remember as a child mom would make a quick fix called ‘mumum’ – a simple gruel of toasted bread cooked in milk with sugar, sprinkled with a pinch of cinnamon and nutmeg powders. We would dig into it with great pleasure. Slowly that mushy warm sweet got a makeover with eggs, raisins, vanilla and other flavours and became a much sought after dessert. Cakes were all fine and dandy but bread pudding was a dessert with a soul. Something that smelt of ‘home’.

Since last few days I have been spending my free time indulging in mug cakes and puddings. There are so many variations that one can make but here are three of my favourites.

A delicious bread pudding with apple sauce topped with some fragrant apple-spice to satiate your craving for both apple pie mix and pudding. A double bonanza.

Another with Irish chocolate chunks and dry fruits. One can use any chocolate and also soak in raisins in bourbon whiskey to make it a tipsy pudding.

The third is a Classic Old Fashioned Bread Pudding with walnut, raisins, spices and vanilla.

These mug puddings certainly bring on a nostalgia like nothing else and are the ultimate comfort food that can be made in a jiffy with simple ingredients from your kitchen.

You can always experiment with the old fashioned one by adding dried berries, sultanas, orange peel julienne, lemon zest , lemon or orange extracts or any other flavours that you like. There is no set rule for a delightful pudding in a mug. 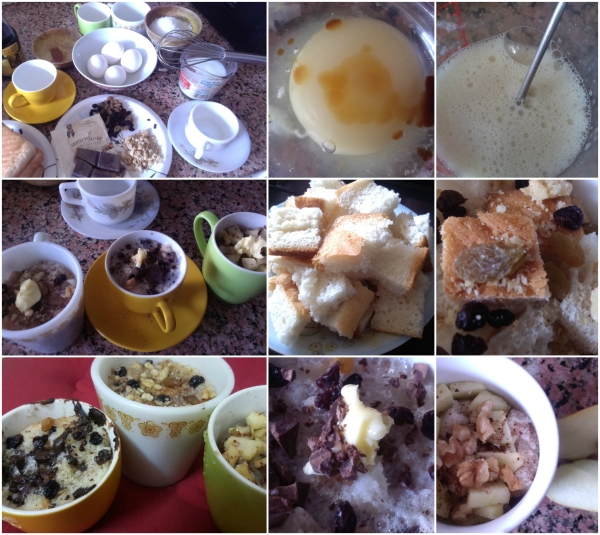 For an Old Fashioned Bread Pudding in mug you need:

Method – Lightly grease the mug with some oil. Cut the bread slices into squares and line them in the mug. Layer them with  the dry fruits of your choice (I used raisins and crushed walnuts) . Fill the mug till 3/4.

Now,  whisk an egg with sugar will creamy. Make sure the sugar dissolves completely, add milk, spice mix and vanilla and stir till everything is homogeneously combined. Pour this custard sauce over the bread cubes till the top. Sprinkle some more spice mix and toss a few raisins. Let it soak for a minute or two, pat some butter on top and then put the mug in the center of the microwave plate. Cook uncovered on high for 90 seconds. ( The microwave time may vary a little depending on the voltage. Check to see if there is any liquid left. If yes, then cook again for 30 second burst (10 sec each) till the custard is fully set. If you see the pudding rising up in the mug then it is done.

Take out and eat warm with your favorite topping of whipped cream /maple or golden syrup. I prefer the pudding plain.

For the Applesauce Bread Pudding variation just add 2 tablespoons of unsweetened applesauce and apple-pie spice mix to the the basic recipe. Layer it in the middle of bread cubes. You can alternately add small cubes of apple too. Garnish the top of the pudding with some more cubes of the fruit sprinkled with apple pie spice mix. For this I caramelize the apple. It gives a unique flavour to the pudding. You can alternately use pear cubes too but I prefer apple bread combo. Pear tastes best in mug cakes.

The apple pie spice mix has cinnamon, nutmeg, dry ginger, all spice. cloves and a dash of cardamom (optional) I don’t like cardamom in it.

For the Chocolate Bread Pudding in a mug – add cubed bread, broken chocolate pieces ( use dark chocolate for best results. (I used Irish whisky chocolate ), some cinnamon. In a bowl mix milk, egg, vanilla with a fork. Pour the custard mixture on top of the bread cubes. Throw in some raisins. Let it rest for one minute and add a dab of butter. Microwave it for 90 sec or till the custard is set. Pour some chocolate sauce or salted caramel sauce over the pudding before eating. I did not use the caramel sauce in this as the chocolate flavour was intense. Instead, I used it in the classic pudding in a bowl which I made from rest of the leftover bread. 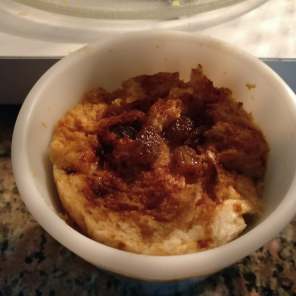 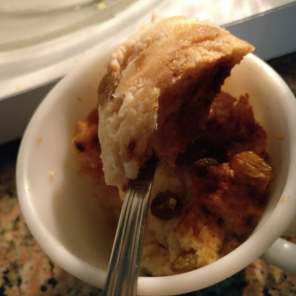 This version has no eggs. I used the full cream milk with the top cream which was perhaps 2 tablespoon for one mug cake. 1/4 teaspoon of Nescafe and a pinch or two of cinnamon plus a handful of raisins. Method of preparation is the same.

Classic Pudding with caramel sauce in bowl. Just for the road.

(You can use white granulated sugar, muscovado sugar, light or dark brown sugar, toned or full cream milk and any bread of your choice. The french breads taste best)

You can add fruits like apple, pear etc to the basic pudding like I did in a few. They taste yum. Chocolate chunks too make it heavenly. Soak the raisins/sultanas/dried berries in milk or whiskey so they become plump and nice. Dry ones are good too but the swollen ones taste better.

Use the sign of the pudding crawl out up to  at least 1/2 inch  outside the mug to know the dish is done perfectly.

Never be afraid to fill the mug till top and things settle down a lot once the bread soaks the liquid. I fill the usual coffee mug a little above 3/4.

Do adjust the cooking time according to your microwave type and bread type. Usually for me it takes about 90 sec to 2 minutes.

Enjoy these bread puddings and share your versions with me.