A juicy red watermelon at the counter made me realise that I never shared the recipe of this super delicious boozy Granita I made last year.  This frozen dessert is perfect treat in this searing heat, super refreshing and delicious.  Let’s say it’s a fancy version of your childhood favorite, the shaved ice with syrups. Barf ka gola.. kala khatta being my favorite. 🙂

Making Granitas require no special skills, just a little patience, a fork and a deep dish like a loaf pan is all that’s needed. You can use cantaloupes, strawberries or any other fruit too but somehow watermelon is my favourite. Look at that color. Also, they are perfect to make granita with because they contain 92% water in the form of juice.

Go easy on Vodka or the Granita will become a slushy. I usually add it after first two scrapping. Never fails to give that robust flavor.

This one also has fresh ginger juice, crushed fresh mint leaves, lemon juice and zest, a touch of wild forest honey and Smirnoff. Go easy on Vodka or the Granita will become a slushy. I usually add it after first two scrapping. Never fails to give that robust flavor. You can use cantaloupes, strawberries or any other for this Granita and use Gin instead or Vodka if you prefer that.

Choose a ripe, juicy watermelon. Chop and take out the flesh in a bowl. Discard the seeds.

In a blender jar add chopped watermelon, mint, honey, ginger juice, lemon zest, lemon juice and half the vodka. Blend nicely till smooth. Do it in batches to get a even consistency. Remember that the frozen treats taste less sweet than unfrozen ones so add slightly more honey to the pureed fruit.

Transfer the puree into a large bowl then strain it through a seive into a deepd dish / cake tin or loaf tin. I used a 9″ loaf tin. Cover the baking tin with a cling wrap. Freeze it for 2-3 hours.

Check to see if the ice crystals have started to begin. Take it out and drag a fork over the Granita to break the ice, scrape it from sides till you get to the less frozen parts,  cover and put it again in the freezer for 50 minutes. Do it a couple of times. During the second round add the remaining Vodka and mix well. You can use sugar, maple syrup or agave nectar for sweetening too. I like the taste if raw organic honey.

Repeat the process until the entire mixture is properly frozen and shaved. Store the Granita covered in plastic wrap till ready to use. 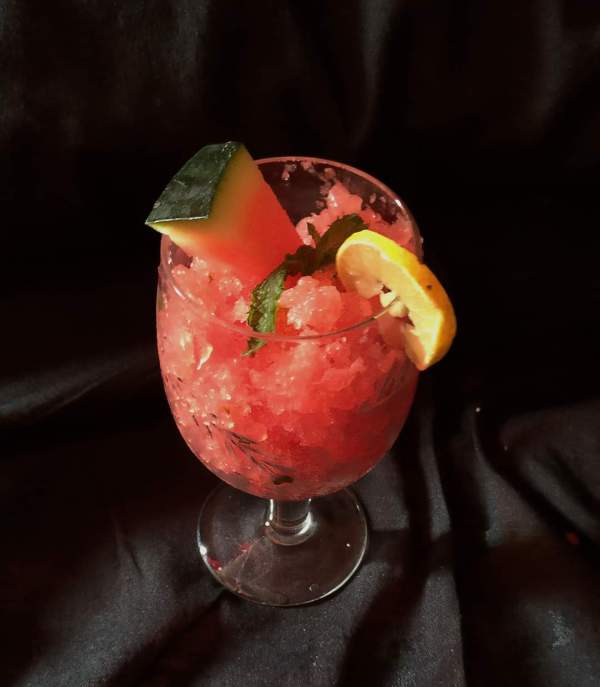 Scoop and serve garnished with muddled mint and chilled watermelon and lemon wedges.

I have been absent from blogging since long for various personal reasons. Once the issues are resolved I’ll try to be regular. Meanwhile please keep showing love on my personal Instagram page. That’s where all the action is right now.

This is the pre launch book review of my second book Wayfaring.  The website on which it was published is not working and many of my readers missed this exceptional piece of writing.

Djelloul Marbrook is a friend and editor-in-chief of The Arabesques Review Magazine where the review was first published.

I am sharing this with permission from the writer.

Originally from Algeria, Djelloul now lives in the USA. An exceptional poet, writer, he’s someone I look up to as a student learning the craft of writing. I feel very honoured that he took time out to read and write such a glorious review for a book very close to my heart.

Here is the full review:

A Journey Beyond the Baggage of Pronouns,In the tradition of Hafez, Rumi and Al Arabi

You is the crucial word in this riverine collection of poems. In their often apostrophic poise they recall Louis Malle’s Phantom India (https://en.wikipedia.org/wiki/Phantom_India), the 1969 film that memorably traces the bloodstream of the subcontinent.

When a poet says the I word once too often poems become forests of girders, obstructing our vision. But the poet Tikuli uses the word to stir the elements of nostalgia, melancholy and fragility until all are ennobled. That is the role of the word I in her alchemical project.

Those three elements in the wrong hands smudge the past, blur it, but in the right hands, in Tikuli’s hands, Wayfaring (https://www.amazon.com/Wayfaring-Tikuli/dp/1909849545) becomes a singular act of recollection, reminding us that the unrecollected life is a job left undone, a mission unaccomplished, a task reneged.

I see him, I see him

standing there, a body trapped in soul,

the memories and the rubble of our home….

the poet says at the beginning of “Ghosts of War.” The I is not about her, it’s about activating an elixir, about taking us to a bombed, ruined mosque, to a ghost.

Tikuli’s use of the pronoun you, the second person, is Sufic when it least seems so. The You of this device is the Sufi dervish’s Beloved. A man or a woman or a child or some other living thing may stand in for the Beloved, but the Beloved, who may be addressed erotically or casually or conversationally, is always that “cloud of unknowing,” that divine idea into which eventually we disappear.

The love poem of the dervish may pass society’s inspection as a tale or an ode or an elegy or a sensual adventure, but at heart it’s always a prayer, a participation in a holy, a celestial project.

Tikuli is a skilled plein air painter; her palette of words is spare, meticulously chosen and applied in a variety of metrical patterns that, while not avant-garde, are modernist and reliable. The reader is never required to study her metrics; her focus is on the act of recollection and its requisite imperative. She has stories to tell, portraits to paint, ghosts to address, and issues to redress.

The impulse to call Wayfaring a stately transit from irregular ode to free-form ballade is checked by Tikuli’s eschewal of standard metric schemes and rhyme, and to claim that Wayfaring is nonetheless just such a transit, as I do, opens the door to a brief discussion of rhyme in modern poetry.

End-rhyme bears with it, unlike internal rhyme, a kind of closure, and that closure is not in concert with the rush of cyber-age information and the inquiries that rush requires. End-rhyme, unless it’s handled with extraordinary subtlety, the kind Sylvia Townsend Warner and William Butler Yeats possessed, tends to trip up and shut down inquiry. That’s why Tikuli and other modernists so often dispense with it, preferring assonance and other devices. But that makes modern poetry difficult to characterize without a new poetics.

In singing of exile, loss, remembrance, grief, journey, Tikuli often uses the pronoun you as Sufi and other mystic poets used thou, to address, to praise, to love, to mourn, but, above all, to open the door to what can be recollected, what can be salvaged, learned, what can be turned into light in the same way a solar lantern collects sunlight all day to illuminate night. Such a lantern must be placed, as these poems are, in a certain order to create a path. That’s why at the very end of Wayfaring the poet says:

….until the sun explodes in my room

separating the night from dark

naked, I wait somewhere between

a lighter shade of white

and a darker shade of black

Tikuli is one of poetry’s antidotes to the fatal, calamitous insistence on being right that besets so many societies. That insistence turns a blind eye and a blank mind to the distinctions she makes in this passage, and in so doing it menaces us. Tikuli offers the eternal aspiration of the dervish to make something in praise of the holy whole to which we belong.

One of Wayfaring‘s triumphs is to give us a collection that, like prayer beads, progresses not only to a way of responding to what befalls but a way of enhancing our observation of what we encounter. Wayfaring‘s strung poems integrate peripheral with head-on vision: the sidelong glance is not lost to central vision, and for that reason in her work we see through much better than human eyes, sometimes the way a circling hawk sees the inhabitants of a field or wood. But the poems don’t merely report, they imagine the songs of people and place. They move like a pavane from the forests of I to the seas of you to the heavens of they, no small feat for any poet.

Two lovers completing each other

It is this cosmos wherein exists

the inexpressible, visible only

to those with eyes which can see.

It’s the poet’s ambition to express the inexpressible. But to do that, ego must be divested. That’s at the heart of Sufism. It’s what the Sufi saint of the poem understood so indelibly. It’s what Hafez, Khayyam and Ibn al Arabi, among many others, understood. Finally, beyond the I, you and they is the holy of holies into which the wayfarer must disappear. None of the pronouns suffice, nor do our names and our possessions.

Addressing the Beloved in poetry is rather like alchemy. To win the patronage of rulers, those coveters of wealth, the alchemists said they intended to transmute base metals into gold. But their real purpose, the best of them, was to ennoble the human soul by finding the elixirs that would ennoble the soul’s baser elements. That’s what is happening when poets like Khayyam and Hafez and Tikuli address you. This you is an elixir.

We wayfare to become the verb, to absolve ourselves of the profane pronouns and the nouns. Wayfaring is testament to this recognition.