I have been fortunate to connect and make friends with writers and artists from across the globe. Social media channels have been a big boon to me as far as my writing journey goes.

I have had some wonderful reviews in mainstream newspapers / online journals and websites for my books but the small notes of appreciation that come via Twitter/Facebook/Goodreads etc mean a lot and are equally special and cherished.

Matthew Bialer is one of the brilliant writers I met on FB. We have not met in person.. not yet. He is an exceptional photographer and painter too.  Sometime ago he posted a mini review of WAYFARING on GoodReads but it appeared under author Siddharth Gigoo’s review as a comment. I missed it then but found it later. Here’s what Matt had to say,

Some more writer friends I admire are reading the book. Chandini Santosh sent me a reader’s Pic and Dominic announced the arrival with a small note.  I will write more about Chandini and her  books etc in the next post. I am excited and nervous about her feedback. She is one of my favorite writers and needs to be read by all. More later. 🙂

Dominic Albanese is a poet and a war veteran from Florida. You can checkout his work HERE.  Most of the books can be downloaded for free. He’s been writing poetry since 1966. This is what he wrote on FB: 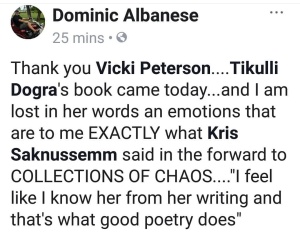 Twitter has got me many followers on the blog. I have come to know a lot of bloggers/writers/artists/ filmmakers there. Here’s an insightful review of ‘Wayfaring’ from a Twitter reader friend. A poet and translator himself though he prefers to be in the shadows. Thank you Ayushman . Do click on the link to read the full ‘tweet review’.

This is my third media mention in HT. Two of them for Wayfaring and the earlier one for my blog. It is a very special feeling. Encouraging too. Thank you Nabanita  for your short yet  insightful review.

This what she said about the book:

“…emotions so vividly expressed that it’s difficult to move from one verse to the other.”

All this good news means celebration. I have an appointment with the dentist tomorrow. I’m scared and fretting as usual but I know he’s one of the best. Keep me in your thoughts. Hopefully it won’t be a major procedure and I’ll be able to celebrate my mom’s 88th birthday the next day. It would be such a joy to have all the children / grandchildren together under one roof. 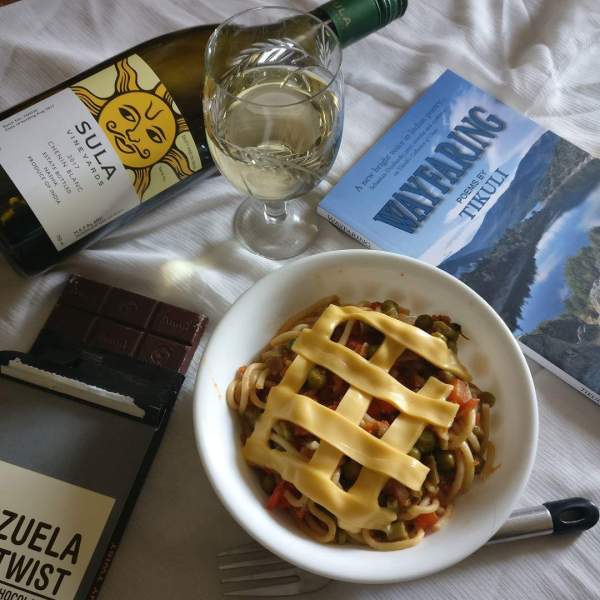