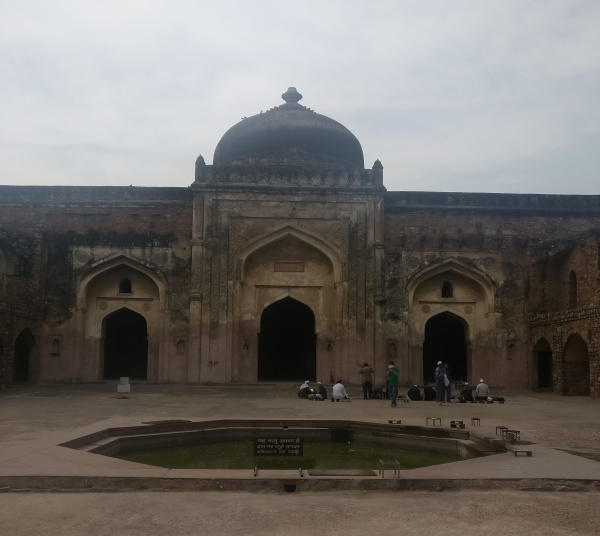 In 1450 the Mughals began their reign starting with Babur, the Mughal empire flourished and reached its pinnacle during Akbar’s reign. He was an ideal king and is considered one of the best rulers among all the Mughals.

Emperor Akbar is usually associated with Fatehpur Sikri, the capital is founded in Agra but I wanted to explore the bits of his story that lives through the ruins in Delhi. I went to the two places in Mehrauli, the tombs of Muhammad Quli Khan and Adam Khan, sons of Maham Anga and Akbar’s foster brothers. I think her remains too are buried along with Adam Khan here but I am not sure. Maham Anga was Akbar’s chief wet curse and held an important place as an adviser to the teenage Emperor. Shrewd and ambitious she was in-charge of the empire and acted as the de-facto regent of the Mughal Empire from 1560 to 1562. The worse kind of petticoat government that ever was.

Khair ul Minazil was commissioned by her during Akbar’s reign and the complex has a mosque and a madarsa (Islamic seminary). The name means ‘ the most auspicious of houses’.  This is an important structure because there aren’t many instances of  surviving  architecture which have the patronage of a woman.  It was perhaps the first Mughal Mosque in Delhi.

This serene mosque is located on Mathura Road, opposite the Old Fort  or Purana Qila. Driving down the busy road in the front of the mosque I had always wanted to stop by and spend some time there. This time I especially made a plan to do so. One can see hundreds of pigeons flying around the structure and for once I didn’t despise the sight.

It all blended in so well. Perhaps in olden times this complex was part of the Old Fort complex. Not many people actually venture into this beautiful structure and that is a pity for one can sense the grandeur of the place by just standing inside the complex. History tells that an assassination attempt was made on Akbar’s life from the first floor of this mosque in 1564. 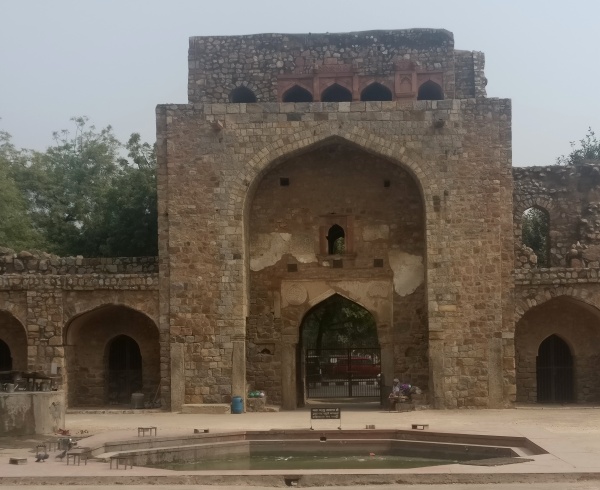 The double storied gateway of the mosque is made of quartzite and red stone but the mosque and the madarsa are made of rubble. If you look from inside the magnificent gate has medallions and intricate stucco patterns etched on it.

On both the sides of the mosque stands the two storied madarsa in dilapidated state. The larger rooms are on the ground floor and a narrow passage leads to the smaller ones on the first floor. Most of the walls are crumbling and no doors or windows are left if there were any. 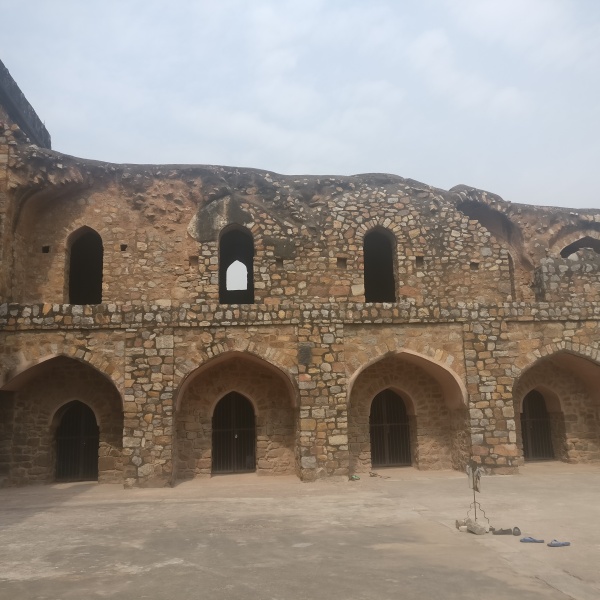 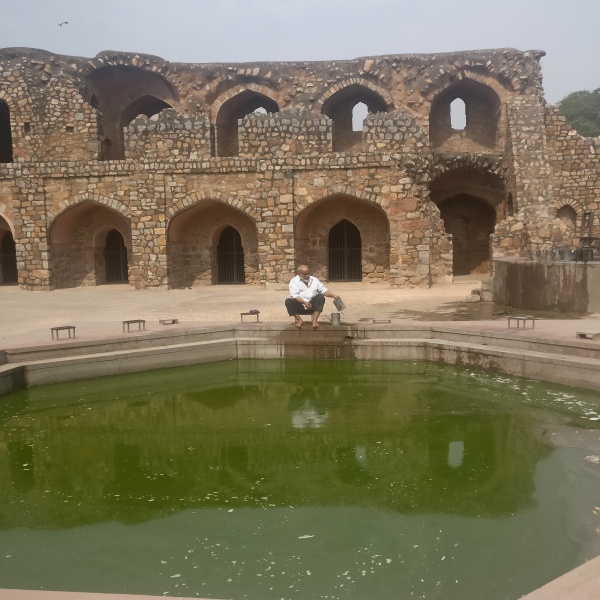 The vast rectangular courtyard has a waju hauz which is not working hence not in use. The old well, on the other hand, is working and people draw the water for waju (ablution).

One can see water pitchers near the hauz that are filled everyday for the residing pigeons. 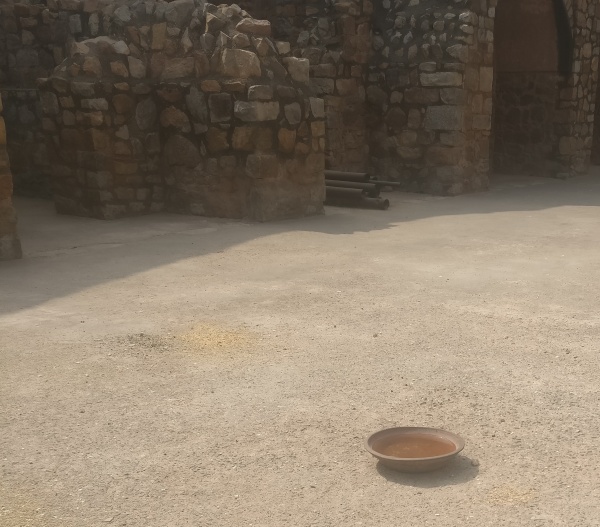 The mosque is better preserved than the madarsa. Earlier there were five arched bays leading to the mosque but now only three are visible. There is a dome at the central bay of the prayer hall while the other bays have been roofed with vaults. The mehrabs, curves and Qur’an scripts are on the verge of decay due to the neglect of the structure. 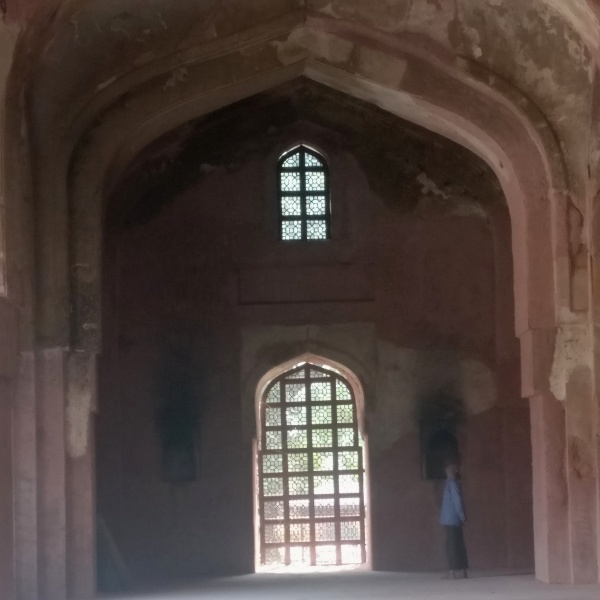 The Persian inscription  set above the central entrance that tells us that this was built by Maham Anga with the assistance of shihabuddin Ahmed Khan. We also see two more names apart from Akbar that of Niyaz Baqsh who constructed Khairul Manazil and Darvesh Hussain who supervised the construction. The name ‘Khair-ul-Manazil’, when written in Persian, yields the number 969 Hijri (AD 1561-62), the year of its construction, and thus is a Chronogram. A very interesting and unique feature of this structure. 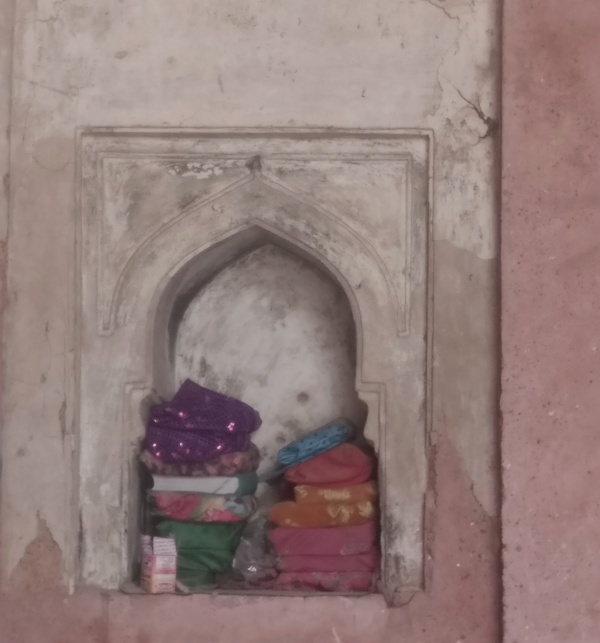 The inside floor of the mosque is still in a fairly good condition because people offer Namaz but the outer floor is in very bad state. 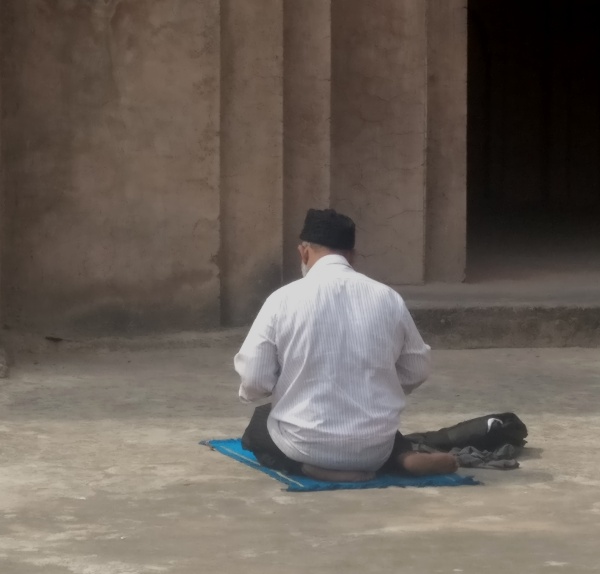 One can see copies of Quran sharif kept in one of the brackets in the wall.

The Mecca facing western mehrab still has some remnants of the exquisitely vibrant blue, red, violet green and yellow enamel tile work, a testimonial to its glorious past. 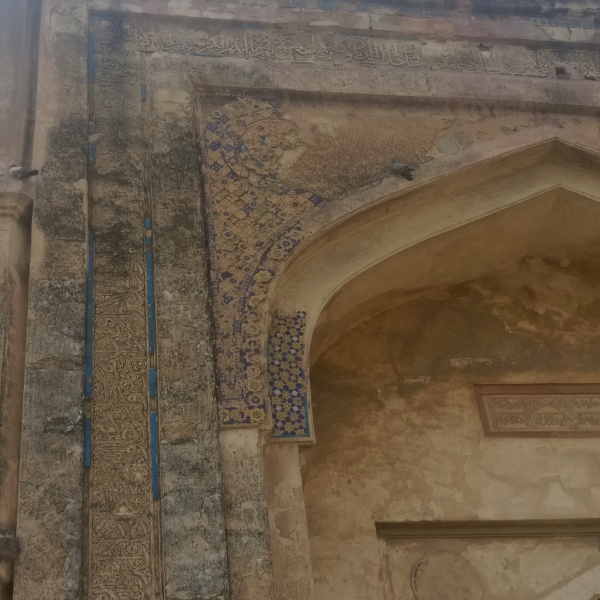 Most of the awe inspiring artwork is now lost to the years of neglect and the gorgeous facade bears a blackened appearance and yet it stands tall as a witness to the beauty and grace this place has managed to keep even now leaving behind the rectangular protruding projections. One can imagine how grand this mosque would have looked in its prime days. Maham Anga was resourceful, rich and very confident woman and left no stone upturned to make this a work of art. No tow tiles of the facade are of the same design. The geometrical and floral patterns are different in each tile. There are some verses from the Holy Quran inscribed on the walls.

On the outer wall of the mosque one can see the brackets that once supported the chajjas or the wide eaves that were meant to keep the sun away.

It is hard to believe that the mosque is erected without any foundation.

The iron gate and the boundaries restrict the movements if you wish to photograph the complex from various angles.

I wanted to take some pictures from the expansive lawns of Sher Shah Gate or Lal Darwaza complex but it is under restoration and public is not allowed at the moment.

I hope more people visit this stunningly beautiful mosque but I also feel that the lack of interest in this has also preserved it from the onslaught of those ‘tourists’ who harm the monuments by engraving their names or drawing cupid hearts etc on the walls.

I also hope Archaeological Survey Of India considers some restoration work here before we completely lose whatever artwork is remaining now. Do visit this place whenever you are on Old Fort side.